Who stays and who goes? 5 questions you need to ask

Who stays and who goes? 5 questions you need to ask 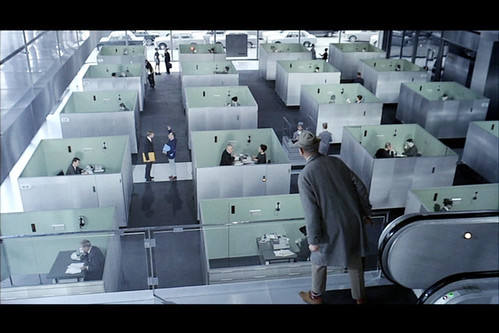 This article appeared in the Triad Business Journal. The above image is a movie still from the 1967 film Play Time.

Right here on Elm Street the economy is forcing some tough questions: “Will I lose my job?” “If she goes, will I have to do her job, too?” And some of you have to answer the awful question, “Who stays and who goes?”

With so many companies already working with a slim staff and shrinking budgets, self-questioning and uncertainty gets louder every day. No matter where you sit in the company—in the hot seat or in the seat of making some cold, hard decisions—there are five questions you can start asking about your staff or yourself that will support your ability to lead through uncertainty.

It’s a similar set of questions we use to gauge a person’s ability to tolerate ambiguity, as well as to identify global leaders. Leaders with high emotional IQ, tacit knowledge, empathy, optimism, and quick learners transcend the multi-cultural idiosyncrasies of the times to lead a disparate group of people.

Essentially, we need people with transcendental qualities here and now. So instead of asking questions that lead to more uncertainty, like “Am I getting fired?,” why not ask yourself something that helps you tolerate, and prepare for, the unknown?

What’s my emotional IQ? People with a high emotional IQ don’t take themselves too seriously. They’re light-hearted. A little self-deprecation says a lot about a person’s humility. And most importantly, they have self-awareness of their strengths and weaknesses.

For example, President-elect Barack Obama caught a lot of flak for appointing Rahm Emanuel to Chief of Staff. Maybe this shows that Obama knows he’s a nice, easy guy who needs a tough guy to help him get things done.

If you don’t know your strengths and weaknesses, you can surround yourself with people just like you. Surrounding yourself with clones won’t help you move in innovative directions.

Are you empathetic? In business, empathetic people can take on another person’s role or point of view in a tough position. That doesn’t mean you immerse yourself in someone’s problems or take on their opinion. You simply understand it. Think about a time you tried to help someone learn or change. Ideally, you can acknowledge the challenges of learning something new as legitimate and not take them on as your own personal challenges or think, “If it were me, I would have felt about this differently.”

What are your street smarts? People with street smarts are politically astute and sensitive to how others act around them. They know that the best answers aren’t always found in books. They know how to get things done even when resources such as money and time are slim, and they can quickly traverse the sometimes complicated networks of policy and process to get something done in a timely way.

What’s your learning curve? The political biographer Doris Kearns Goodwin stated that the best candidate for president of the United States would be the one who could learn, grow and change (“Meet the Press,” October 21, 2007).

Are you optimistic? My good friend and colleague David Campbell has said, “The higher you go, the more optimistic you are.” Optimism in business is the ability to take a negative situation and see it as opportunity. You can move forward without fear. If you’re going to fail, you fail fast and fail forward.

Think about a time you thought you were dealt a bad hand. How did you handle it? Or a time you had a bad boss. Can you reframe the situation? Can you say, “She was a bad boss, but I learned a lot from her”? The hope is that we can look back on times like this, acknowledge the challenges, and learn the lessons.

Uncertainty is good for learning. Are you good with uncertainty?

A Yale University study last month says we learn when uncertain. “We only learn when there is uncertainty, and that is a good thing,” said Daeyeol Lee, Yale’s Dorys McConnell Duberg Professor of Neuroscience and professor of psychology and psychiatry.[...]

Here’s an excellent interview with our friend and colleague Liz Mellon, speaking about her book Inside the Leader’s Mind. Thinkers 50.[...]

A review of “Inside the Leader’s Mind” by Liz Mellon

Liz Mellon walks with us among dozens of leaders, whether sharing their most public moments or abiding their most unguarded confidence to report her observations and present a behavioral prescription, not for success in itself, but for a sublime personal[...]

CLO: Nice work if you can do it.

In this month’s CLO magazine: It’s nice to be needed. There’s been an uptick recently in coaching and executive education engagements in South Africa, India, France, Spain, the United Arab Emirates, the United Kingdom and, ever so gradually, the United[...]

You want ethics? We got ethics!

Our coaching and classroom engagements during this quarter are taking us to England, Spain, France, the United Arab Emirates, Qatar, India and South Africa. Given the United States’ role in the 2008 financial crisis, our role as AMERICAN executive development[...]