Status quo versus uncertainty—Why our bad ideas look so good?

Status quo versus uncertainty—Why our bad ideas look so good?

James Surowiecki writes in a recent issue of The New Yorker about “Status Quo Anxiety” as it relates to the US debate on health-care reform. He points to studies that show humans love what they already “own” juxtaposed to political polls that reveal Americans are simultaneously dissatisfied with their health-care services and reluctant to change in any significant way.

The academics Ziv Carmon and Dan Ariely showed the same thing in a real-world experiment: posing as ticket scalpers, they phoned people who had entered a raffle to win tickets to a Duke basketball game. People who hadn’t won tickets were willing to pay, on average, a hundred and seventy dollars to get into the game. But those who had won tickets wanted twenty-four hundred dollars to part with them. In other words, those who had, by pure luck, won the tickets thought the ducats were fourteen times as valuable as those who hadn’t.

Surowiecki goes on to suggest that the concept of status quo is, itself, at best tenuous. For most Americans, if you lose your job, you lose your health care insurance. The security we all cling to may not be a complete illusion, but it is definitely ambiguous.

Uncertainty, the natural human response to ambiguity, causes most people to look for certainty and that usually involves clinging to the familiar. But if a familiar approach hasn’t worked in the past or got us into trouble, it’s like staying with a sinking vessel.

In your work, are you willing to abandon a bad idea even though you “own it”? 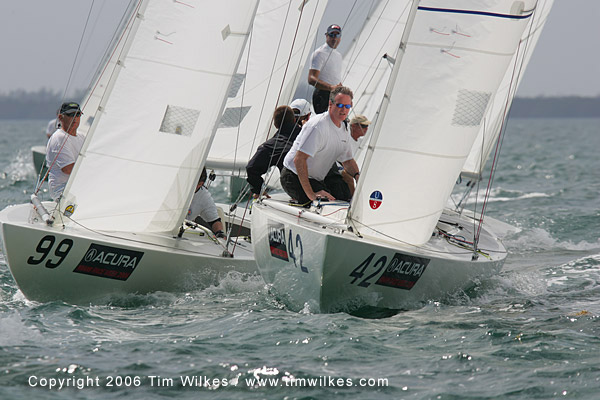 Dr. Randall P White, yachtsman, in Miami regatta. Randy—evidently with a GOOD idea out front in number 42—is in the middle, sitting.