Women have a knack for managing uncertainty

Women have a knack for managing uncertainty 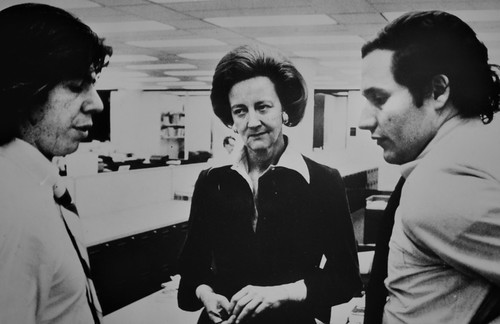 Read the full story in this month’s Monitor Psychology

Wanted: Leaders equipped for today’s trials
To become an effective leader in today’s volatile job market, tap your strengths—and learn some new ones.

With today’s rapid globalization, changing technology and the turbulent economy, leaders must excel at dealing with change and ambiguity, said veteran leadership trainer Sandra Shullman, PhD, at the Aug. 12 APA Committee on Women in Psychology Leadership Institute for Women in Psychology.

“The rate and pace of change is extraordinarily high,” said Shullman. “It’s why so many leaders both in business and academia are staying up late at night, because it’s often unclear exactly which direction things are going.”

Fortunately for women, the leadership styles in vogue are ones that research shows women both prefer and are more effective for them, noted Shullman, a managing partner with the Columbus, Ohio, office of the Executive Development Group, an international leadership development and consulting firm.

Shullman advised the women to:

• Take a democratic rather than autocratic approach. Sometimes called a “transformational” leadership style, through this approach, leaders delegate some power and autonomy to employees and encourage their independence and creativity.

• Foster active, ongoing learning for both employees and leaders. Such learning is critical in getting up to speed with today’s global markets or with technology, she said.

• Learn through experience. Research shows that great leaders learn 70 percent of their leadership skills on the job, 20 percent from mentors and role models and 10 percent from coursework. That may be a hard concept for people in academia to accept, Shullman added, but they need to overcome the tendency to overthink, so they can act.

• Exploit your personal style. Good interpersonal skills are a mark of effective leaders. In particular, good leaders can read and respond to the emotional needs of a situation, she noted. “When 99 percent of the people in a group you’re leading are angry and you reflect that anger, you’re perceived as an effective leader,” she said. “If 99 percent of the group aren’t angry and you’re reflecting anger, you may be seen as out of touch with your group.”

• Be a “good enough” leader. Research shows that if leaders have 10 major leadership areas they need to attend to, great leaders do two or three of them extraordinarily well and seven or eight “well enough,” said Shullman. If you’re a whiz in your field and a clear, courageous decision-maker, for example, you don’t also have to be a top-notch organizer or an ace strategist.

Being less than 100 percent perfect “is a hard concept, especially for women,” said Shullman. “We tend to use our best area as the standard for all other things, so sometimes we don’t try new things.”

• Embrace challenge. How much you learn is directly related to the size of the challenges you face. Good leaders admit their mistakes and learn from them, she said. “Many of us keep our memories of failure like they should be preserved in a museum somewhere,” she said. Instead, solve the problem first and figure out what may have caused it later.

• Work on your behavior. Good tools are available to help you learn and work with your leadership style, including an inventory called the FIRO-B (Fundamental Interpersonal Relations Orientation-B), which participants took before arriving at the institute. The scale taps leaders’ expressed and desired needs for affection, control and inclusion and how those play out in leadership behavior preferences.

“Ultimately, people respond to how you act,” Shullman said, “and you can learn to work with your behavior.”

• Take time to learn. “You can’t teach people to be wonderful leaders in eight sessions,” said Shullman. Research also shows it’s better to focus on one or two things you can really sink your teeth into.

• No woman is an island. Research shows that people who share goals with valued colleagues are more likely to achieve them than those who don’t.

“Whether you go to a leadership training institute for one week, six weeks or six months,” Shullman said, “sharing your goal with significant colleagues at work is what seems to matter in terms of whether you do anything with what you’ve learned.”

“Are Leaders Born or Made?” was the title of a Masterclass we just completed at the Commercial Bank Plaza in Doha. It’s the latest special session tailored specifically for Commercial Bank in a partnership between HEC Paris in Qatar and[...]

Frank Kalman writes in this month’s edition of Chief Learning Officer about learning from failure: …Aside from the psychological distaste associated with human failure, one of the larger barriers keeping more corporations from embracing it as an engine for learning[...]

Recommended reading— Gender equity is teachable to the organization

Since co-authoring Breaking The Glass Ceiling: Can Women Reach The Top Of America’s Largest Corporations? in1987 (paperback in 1994), we’ve seen great progress in the advancement of women in business. Last week Katrin Bennhold noted in International Herald Tribune that[...]

Drs. Randall P White and Sandra L Shullman are featured authors in the April issue of CLO Magazine. Writing on Ambiguity Leadership, Randy and Sandy advance the idea that an aptitude for ambiguity and the ability to be comfortable amidst[...]

We have been studying the affects that ambiguity has on leaders for two decades. The uncertainty that we all feel in ambiguous situations appears to be both a challenge and an opportunity. The ability to fearlessly grapple with ambiguity might[...]