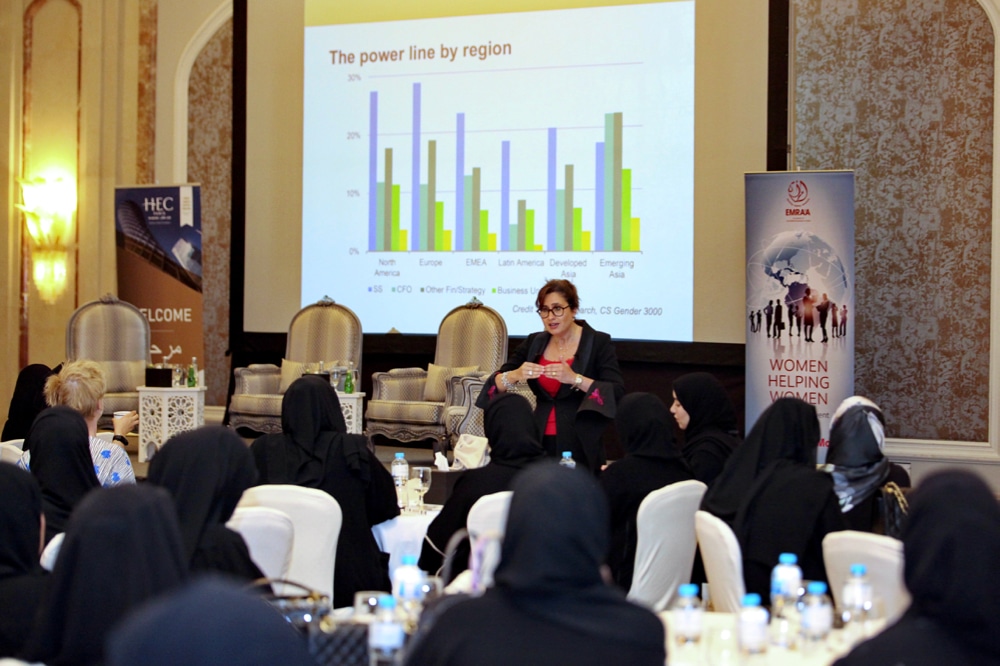 Women Helping Women seminar in Doha reveals progress in gender parity, along with many of the same old obstacles

By Executive Development Group In Uncategorized, Women in Leadership On May 15, 2019

In 1987, Ann Morrison, Ellen Van Velsor and I wrote Breaking the Glass Ceiling: Can women reach the top of America’s largest corporations? Back then, the idea of some 200 women, in mostly STEM careers, many with advanced degrees, gathering in Doha, Qatar to discuss women in leadership seemed impossible.

As a professor with HEC Paris, I had the pleasure of co-leading the event with a friend and colleague, Sherena Mistri-Yiannouka. Sherena is country manager for the leadership consulting firm Dynargie Singapore.

So, can women now reach the top of the world’s largest corporations? Sadly, not enough.

Our engagement in Qatar was locally focused, but seemed to be indicative of larger global trends for women in leadership at global organizations.

I’m thrilled that we can get 200 highly-placed women—many engineers—to talk about women in the workplace in the Middle East. However, we also confirmed there is still a long way to go to have gender parity in the corporate world.

Sherena was similarly encouraged and concerned.

“Since I moved to Qatar in 2012, I have been pleasantly surprised by the number of women engineers and professionals I meet here working in STEM industries. It was lovely to meet so many STEM professionals at the EMRA’A event and I was struck by how eager they were to share their personal stories and journeys,” she said. “A number of women at the event who I spoke with regarding gender issues in Qatar, said that they felt things were changing for the better and while they were optimistic, they were also impatient with the slow pace of progress in this area.”

When I teach at international business schools I acknowledge that we’re engaging with professionals in the elite context of executive education, where meritocracy is advocated and academic rewards cross both ethnic and gender lines. What happens day-to-day in workplaces still positions women within their own “narrow band of acceptable behavior,” as we called it in Glass Ceiling. And this is along with a continually uneven playing field on which to pursue careers in general.

“While there is more equal opportunity in education, this does not necessarily translate to equality in the workplace, especially in senior management positions,” says Sherena. “The women I meet in Qatar often talk about ‘glass ceilings’ and ‘maternal walls’ that they come up against that prevent them getting ahead at work.”

Our office conversations about gender roles and careers, in the West as well as the East, are still laced with patriarchal assumptions.

Even recent trends in the way workplaces work negatively affect women’s careers. A recent New York Times article says it all: “Women Did Everything Right. Then Work Got ‘Greedy.’ How America’s obsession with long hours has widened the gender gap.” According to the Times’ Clair Cain Miller, the opportunity for educated couples to earn far more income most often means the woman’s career is diminished.

Women helping women? Time for everyone to step up

The Qatari women in the conference hall last week were high performers and high achievers, and Qatar ranks high among nations providing advanced education to women. Still, the conversations often veered back to what we heard in 1987 and again in 1992 when we followed up with the original sample of women to see how they were progressing in their careers. It is what I continue to hear year after year.

Women are still expected to manage domestic duties regardless of their career levels. Men still receive preferential opportunities. And if the Fortune 500 is any indication, women aren’t making it to the top of large global organizations very often, nor staying very long.

We very much need and appreciate initiatives like ExxonMobil EMRA’A, and corporations have made significant strides and shown progress in advancing women. Society-at-large needs to get on board and evaluate how we can do more for equality from primary education to getting in the door for interviews. Maybe government leadership can facilitate this.

Also, men need to be engaged in the problem.

“While I think women helping women is very important, I think men also need to be engaged in the conversation,” says Sherena.

It might be interesting if the next time we scheduled such a presentation every woman is tasked with bringing a more senior leader who just happens to be a man. Wouldn’t that conversation be different?

Leadership outcomes from the EMBA, in CLO Magazine

Writing in CLO Magazine, Randy White presents the benefits of the more leadership-focused executive MBA. Randy spoke with academic colleagues Dr. Roger Hallowell, Marina Kundu and Dr. Mary Logan to gain insights about how masters programs have evolved to include[...]

Randy White and Sandy Shullman feature the stories of three clients of the Executive Development Group in their article, “Build Leadership’s Tolerance for Ambiguity.” Read it all in this month’s CLO Magazine We have a serious problem at the Food[...]